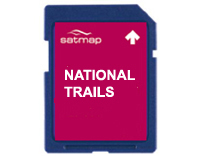 This path is named after the early fifteenth century folk hero Owain Glynd r, who held a Welsh Parliament in the town of Machynlleth, which can be visited en route. It begins on the English border and winds its way over open heather clad moorlands, rich farmland, and through the forest of Mid Wales. It provides many splendid panoramic views such as the tranquil hills of Radnor, spectacular Cader Idris, and the drama of the Cambrian Mountains. Length of path 213km/132miles.