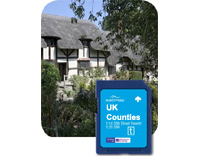 The landscape of Somerset has something for everyone. There is a large section of the Exmoor National Park, famous for its rugged heathland and the Exmoor ponies, one of the world's oldest breeds. There are also three Areas of Outstanding Natural Beauty, the Blackdown Hills, the Mendip Hills and the Quantock Hills, England's first AONB, consisting of large areas of oak woodland, ancient parkland, heath and traditional agriculture, an area that, unusually, is also designated a Site of Special Scientific Interest. All this can be enjoyed from over 3,000 miles of footpaths and bridleways, including the start of the 630 miles South West Coast National Trail.