The Garmin STRIKER Cast fishfinder is a sonar device that when paired with your Android or Apple device lets you stream and view sonar on your phone or tablet.  Set up is quick and easy and the Garmin app is free to download.

The sonar connects and streams wirelessly for up to 60 metres / 200 feet.

Two versions are available, one with GPS, one without.  The GPS version lets you create your own maps with 0.3 metre contours.

To make best use of the device, it is recommended that you cast and leave the device on a dedicated fishing rod so that you can continually change the Cast location.  Also repeatedly casting the device as you fish provides a clearer picture of what is below the surface.

Turn you phone or tablet into a fishfinder using the castable sonar STRICKER Cast GPS and create your own contour maps of what is below the surface. 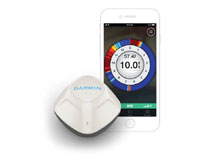 The sonar STRICKER Cast turns your phone into a fishfinder to take the guessing out of where the fish are.