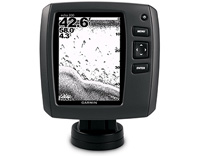 Installation takes only a few minutes using the quick-release tilt mount and versatile transom-mount transducer included in the box.