Satmap Systems Ltd is a UK based company founded in October 2005. They have developed 3 high-end, award winning handheld GPS devices that are designed for serious enthusiasts of the great outdoors, especially walking, hiking, cycling and off-roading.

Active 10. The Active 10, first released in 2007, featured a large screen, rugged casework and 2 axis electronic compass. The device is used by many Mountain Rescue Teams across Europe and received numerous awards.

Active 12. The successor to the Active 10, was released in 2014. The Active 12 brings a high resolution screen, 128MB of RAM, a barometric altimeter and Bluetooth connectivity. The Active 12 IE Edition is available for sale here.

Active 20. The Active 20 is the latest edition to the Active GPS range and was launched in May 2017. The all-British-made Active 20 features DualControl touchscreen and buttons, Wi-Fi and a very high ruggedness spec. It features IP68 waterproofing, IK7 shock-proofing, long battery life and dual touchscreen/button control. Maps are supplied on microSD cards that simply plug straight into the device. Features include a 3-axis electronic compass, integrated barometric altimeter, Bluetooth & Wi-Fi connectivity, on board route planning and map orientation options. The IE Edition available to purchase here.

Satmap Xpedition. Released in 2011, Xpedition allows users to plot and share routes using mapping from a number of providers, including OCM, OSI and Satmap's Adventure Layer. Xpedition is a browser based application, requiring internet access and Microsoft Silverlight plug in.

SatSYNC. SatSYNC is free software that allows routes, POIs, etc to be transferred easily between Satmap GPS devices and computers. SatSYNC can also be used to transfer route files (and POIs, etc) exported from most route planning tools, including Xpedition.

To compliment the Active series of GPS devices, Satmap have over 400 hundred high quality maps from a number of reliable sources such as Ordnance Survey and OpenCycleMap. As of 2014 Satmap have developed the Adventure Layer mapping, which uses a special Satmap custom version of OpenCycleMap data. 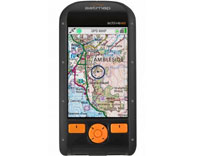 Since its launch, the award-winning Active series has been undergoing rigorous testing by rescue teams and other non-commercial organisations across the world, including Ireland, the UK and Austria. Through the close collaboration with these professionals, Satmap has been able to continuously implement new functions and features, designed especially to improve safety, reliability and ease of use; crucial factors during any rescue operation. The Active 10 has been quickly adopted by rescue teams and today Satmap is: