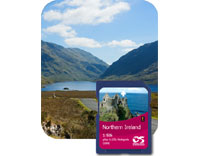 Northern Ireland
Northern Ireland, one of the four countries of the United Kingdom, has a vast array of attractions, ideal for the outdoor enthusiast, from stunning landscapes and scenery to vibrant cities and interesting remnants of the country's past. The six counties; Down; Armagh; Londonderry; Fermanagh; Antrim; and Tyrone offer a unique and peaceful natural environment, perfect for exploring the great outdoors. The two major cities: Belfast and Londonderry City offer a rich cultural heritage, with many more attractions such as the birthplace of the Titanic right at their doorstep. Further into the countryside, Northern Ireland´s wild and craggy mountains famously inspired CS Lewis´ fabulous land Narnia. Mourne Mountains is one of Northern Ireland´s nine areas of Outstanding Natural Beauty and a most picturesque district. Lough Neagh, the largest freshwater lake in Ireland and Britain is a place of unspoiled tranquility. Antrim Coast road is often described as the most scenic path in the British Isles is wedged tightly between sea and cliffs. The country´s many lakes, loughs and sweeping coastline are the perfect setting for many outdoor activities.

Toggleable Map
This map is toggleable. Toggling is a new feature available only on version 1.4 of Satmap's platform software (downloadable for free from www.satmap.com software page). You must have version 1.4 or later in order for this map to work. Toggling allows the user to flick between two map scales of the same area - rather than zooming in all the way into the 1:25,000 scale or all the way out to the 1:50,000 scale, you can jump between one scale and another at the flick of a switch! In order to toggle a map (flick between the two scales) - you must be in an area of the map where the two different scales overlap. At the appropriate zoom levels, the "toggle sign" will become bold - which means you can click the "toggle button" and flick from scale to scale (instead of zooming).

Compatible with the following Products